Plant a tree in memory of James
An environmentally-friendly option 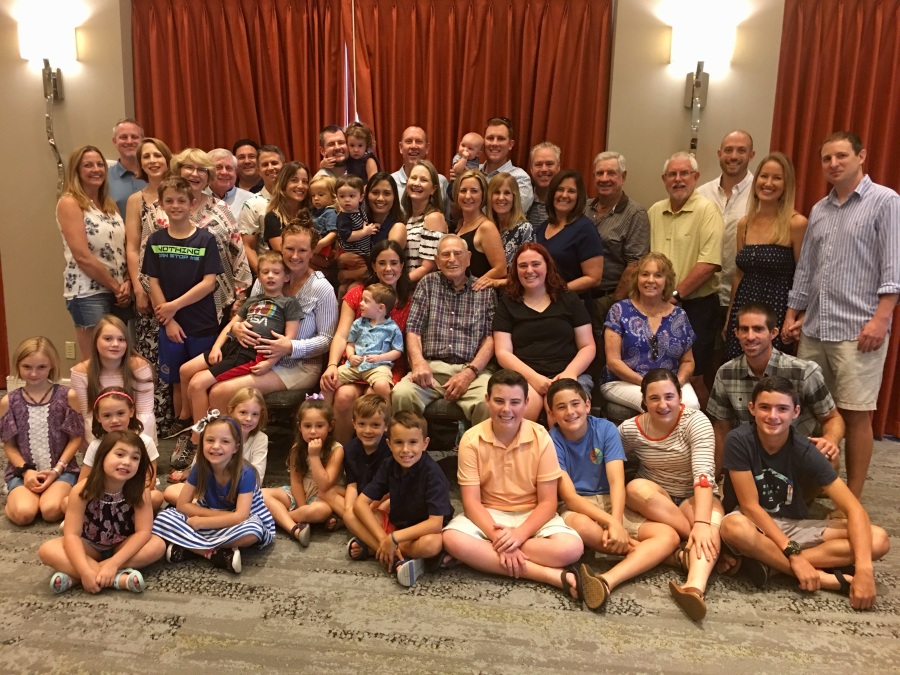 Sonny (Papa J) married Velma Charlotte Shore (Mama J) on July 4th 1942 and lived a loving and caring life together for 71 years. Raising 4 men; Jimmie (Anne) Fred (Cindy), Jeffrey (Jan) and Jon (Marcia). Papa J and Mama J’s family grew to 12 grand-children and 24 great grandchildren. Sonny grew up in West Palm Beach and Tampa the son of James Elton Jaudon Sr. (1946) and Ethel Walston Jaudon (1929).  His mother named him “Sonny” because of his disposition and attitude. He graduated from Palm Beach High in 1939.  A Navy Veteran of WWII leaving the service as a Storekeeper 1st Class.  Sonny was born in Lebanon, KY on his mother’s family homestead, as were all his siblings (Porter, Ilda (Chuck), Lillian (Ping) and Herbert (Bert)). After his mother’s death he moved to Ballast Point, Tampa to work on his uncle Jack King’s dairy farm (now part of MacDill AFB), returning to West Palm Beach to attend high school. He always said his life experiences on the farm taught him the values that would define his life.

Life in High School was very good for Sonny. He excelled in baseball and football. Elected captain of both sports his senior year.  In 1938 he was selected as “Best All Around” and in 1939 as “Most Athletic”.  In addition, he was the Vice President of his Junior and senior Class.  The Sports Editor for the Palm Beach Post Times, Bob Balfe, wrote in 1939, following a losing football game to Pahokee High School:

“He (Sonny) grabbed us by the arm. He looked like he wanted to cry but couldn’t, it was his last game and it wasn’t a happy ending. But do you think he wanted to tell us an alibi.  Not Sonny, that lad who is going to be a real man grabbed our hand and said:  Give them credit Bob. They really won it. Be sure to give them credit!” This was the essence of Sonny Jaudon.

After the war, starting as a delivery driver for a sausage company, wholesale grocery salesman, operations manager for Port of Palm Beach, Director of Port of Palm Beach, Director City of West Palm Beach Housing Authority and eventually to Director Port Manatee from which he retired in 1981.  These accomplishments are the direct result of his no quit work ethic, common sense approach, fairness and ability to build lasting relationships.  Everybody wanted Sonny on their team!

1974 he coached/managed at every level from Little League to American Legion Baseball.  He was recognized by the Major League Scouts Association for his many contributions.  In 2008 Sonny was inducted into the Palm Beach County Sports Hall of Fame in recognition in his efforts in developing a self- sustaining model for supporting American Legion Baseball.  He was a part of several state titles, regional titles and participation in the Legion Baseball National Championship. Sonny’s leadership style of developing fundamental skills, instilling a sense of competitiveness and discipline while making it fun made him well respected and remembered by hundreds of kids.

Sonny was also very active in the American Legion Post 12, serving twice as Commander.  He also was active in the Propellor Club and the Exchange Club, serving as president of both organizations.  Sonny also organized many Palm Beach High School class of 1939 reunions. Sonny loved the Florida Gators and spent many Saturdays glued to the radio/TV.  As he would often shout, GO GATORS!.

Sonny was gifted with a winning smile an uncanny sense of what is right, compassion for others and an inspiring attitude for the future.  As the Jaudon family, we are charged to keep his memory and his spirit alive.

Plant a tree in memory of James by clicking here.
To send flowers to James' family, please visit our floral store.

A service summary is not available

Plant a tree in memory of James
An environmentally-friendly option

Plant a tree in memory of James

3 trees planted in memory of James

Click here to return to the Condolences & Photo Gallery

I just wanted to let you know that Sonny was a wonderful man.  He and Velma were great fun to be around..  Buddy and I were neighbors of your family for years and Sonny was actually my husband's boss at the Port of Palm Beach.  I had spoken with your parents several times over the years.  I know your Mom has been gone for a while and now they will be able to be together again.  God bless you all.

To Fred and all the Jaudon family. . . I am sorry to hear of your loss.

A Memorial Tree was ordered in memory of James E Jaudon Jr..  Plant a Tree

My Mother, Mary Ann Geis, lived next to Sonny & Thelma at Pinebrook and I always enjoyed talking with him when I was there.  A wonderful person who was a pleasure to know.

Plant a tree in memory of James